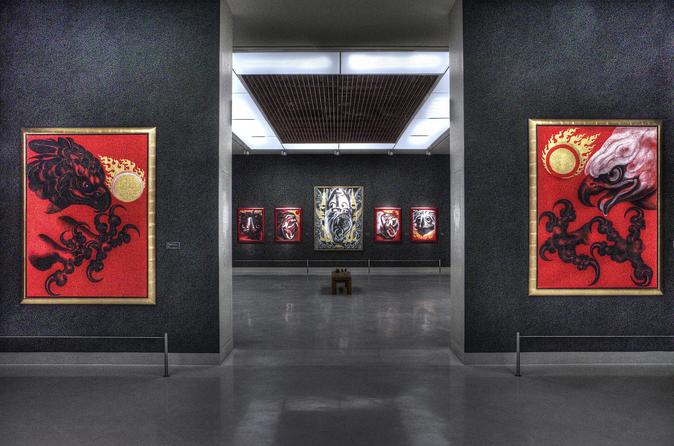 Contemporary, modern and ancient forms of art have attracted collectors and admirers to Bangkok because of its abundance. You will dive deeper into the art scene and tour the most recognizable places, displaying the finer works of art in its full glory.

Your day starts early in the morning when your art-minded guide and driver will be waiting for you in the lobby of your hotel. Depending on the location of your overnight address, changes in the order of visit may take place.

There are currently two forms of art that dominate the scene; in its ‘modern’ form, art in Thailand as well as in South-East Asia in general continues to take an important place: visual art inspired by (very) ancient art made by modern artisans, and visual art made by contemporary artists that were taught the occidental techniques.

The first stop is at the teak-wooden Vimanmek Mansion, often referred to as the Palace in the Clouds. With its European style, Vimanmek Palace was built according to Thai traditions, using golden teak wood and not a single nail. Among the possessions of Rama V on display are Thailand’s first indoor bathroom and the oldest typewriter with Thai characters, as well as various Thai ceramics, European furniture, precious China and lovely portraits.

After lunch at a local restaurant, continue to explore the arts of Bangkok at the Suan Pakkad House. Hidden between the high-rises and construction sites are several charming homes surrounded by large, peaceful gardens. The royal quarters were converted into a public museum after the death of Prince Chumbhot and his wife. Five traditional houses cluster around small lotus ponds and meticulously trimmed lawns.

The day ends at the Museum of Contemporary Art in the heart of Bangkok. This mid-town facility takes a contemporary approach towards various forms of the performing art movement, both domestically as well as on an international level. It has become a popular hang-out for artists and the growth of cultural programs for the art-minded community, and it reveals how the country’s creative sector has developed.

After this amazing day of getting up and close with the various aspects of Thai arts you will be brought back to your hotel safely, arriving at approximately 6pm.

Contemporary, modern and ancient forms of art have attracted collectors and admirers to Bangkok because of its abundance. You will dive deeper into the art scene and tour the most recognizable places, displaying the finer works of art in its full glory.

Our system is experiencing some issues at this time. Please try again later.