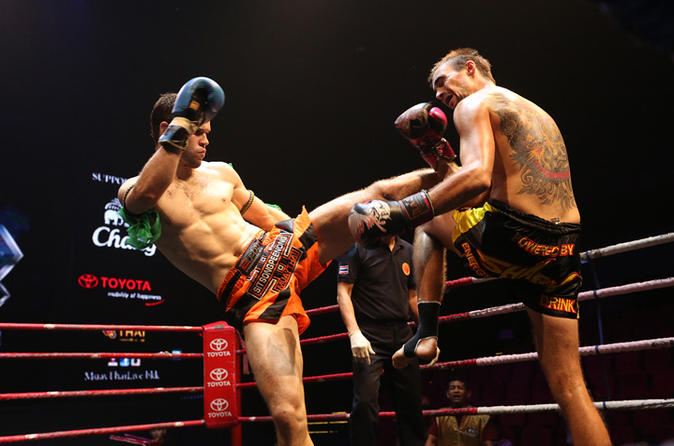 Muay Thai Live: The Legend Lives conjures up Muay Thai’s greatest heroes, from the origins to present day, in a series of tales artfully woven together. The shows now extended with two Muay Thai bouts after the performance for you to get total Muay thai Experience.

Over the course of the show, the audience will witness a mysterious stranger  defeat champions in The Tiger in Disguise; they will be amazed at the feats of Nai Khanom Tom, a chained prisoner who faces ten savage fighters in The Prisoner with Eight Limbs; they will tremble for General Pichai, who confronts heavily armed warriors with his bare hands in The Broken Swords; flash-forwarding to the present, the audience will watch in awe as a kickboxing lover rescues his girlfriend from the grips of thugs - Thai style - in The Action Hero; Finally, as the show draws to a close, we finish with 2 bouts of real muay thai fights, the spiritual power of Muay Thai and its connection to the Thai people will be reveal in Muay Thai Forever.

1699, Kingdom of Ayutthaya: At a temple fair while the villagers are enjoying the festivities, a stranger appears. Who is he? Why does he exude so much charisma and demonstrate such kickboxing prowess?

ACT 2 THE PRISONER WITH EIGHT LIMBS

1767, the Kingdom of Ayutthaya lies in ruins after protracted wars with fierce enemies. Many Thai soldiers are taken prisoners. Among them is a Siamese warrior with unmatched skills in Muay Boran (the ancient form of Thai Boxing). Being unexpectedly released from his prison cell, he realizes he must defeat barbaric killers before he can truly earn his freedom.

ACT 3 THE WARRIOR WITH BROKEN SWORDS

1773, War against enemies intensify across the land. The best swordsmen are recruited for a final battle to protect the motherland. Led by General Pichai, the revered warrior of the double swords, the battle takes a dramatic turn when one of his sword is shattered. What happens when weapons are down and men are left with nothing but body and soul?

An illustration of the most dangerous techniques of the Ancient art of Muay Thai, which have not been performed in more than a century because they are too dangerous as a sport.

When the son of a police chief sees the girl he loves kidnapped by thugs seeking revenge for his father's actions in service of the Law, our Action Hero has no other choice but to bring his other passion in life, Muay Thai, to the rescue.

Muay Thai Live: The Legend Lives conjures up Muay Thai’s greatest heroes, from the origins to present day, in a series of tales artfully woven together. The shows now extended with two Muay Thai bouts after the performance for you to get total Muay thai Experience.

Our system is experiencing some issues at this time. Please try again later.